ABOUT THE THOMAS LECTURESHIP 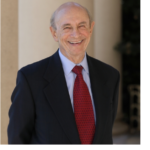 Harvey J. Alter, MD , 2020 Nobel Laureate in Physiology or Medicine for Contributions to the Discovery of the Hepatitis C Virus

Harvey J. Alter, MD, has been designated a Distinguished NIH Investigator, only one of 23 NIH scientists to hold that distinction. In his long career in clinical research, Dr. Alter has played a key role in the discovery of two hepatitis viruses, namely hepatitis B virus (HBV) and the non-A, non-B virus, later designated the hepatitis C virus (HCV). In long-term prospective studies, Alter helped define the natural history of NANB/HCV infection and proved its frequent progression to chronic hepatitis and its evolution to cirrhosis and liver related mortality.

Dr. Alter was principal investigator in sequential prospective studies of transfusion-associated hepatitis (TAH) that were instrumental in influencing national blood policy and documented the progressive decline of TAH incidence from 33% in the 1960s to near zero in 1997. Millions of cases of TAH have been prevented through interventions documented in these studies.

For these studies, Dr. Alter has been awarded the PHS Distinguished Service Medal, the AABB Landsteiner Prize, the First International Medal for Science from France’s INSERM, the American College of Physicians (ACP) Award for Outstanding Work in Science, and the Distinguished Achievement Award of AASLD.

For his cumulative research accomplishments, Dr. Alter was elected to fellowship in the American Association of Physicians and received the prestigious Clinical Lasker Award and the Canada Gairdner International Award. He was elected to both the National Academy of Sciences and National Academy of Medicine and achieved Master status in the ACP. In 2020, Alter was awarded the Nobel Prize in Physiology and Medicine.