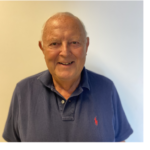 John R. (Jack) Murphy attended the University of Connecticut where he received his bachelor’s degree in Zoology in 1965 and his PhD in microbiology from the University of Connecticut School of Medicine in 1972. He then joined the laboratory of Professor Alvin M. Pappenheimer, Jr at the Harvard Biological Laboratories as a post-doctoral fellow from 1972-74. The Pappenheimer lab was world-renowned for its seminal studies on the mechanism of action of diphtheria toxin, a self-injecting bacterial protein toxin which catalytically inactivates eukaryotic protein synthesis. Jack’s work under Pappenheimer revealed the presence of a factor in Corynebacterium diphtheriae lysates which inhibited the in vitro transcription and translation of diphtheria toxin in S-30 extracts of Escherichia coli. Jack later followed up on this seminal observation by characterizing the iron-regulated repressor, DtxR, which governs diphtheria toxin transcription.

In 1974, Jack was appointed to the faculty of the Department of Microbiology and Molecular Genetics at Harvard Medical School, and in 1984 he became Professor of Medicine and Chief of the Section of Biomolecular Medicine at the Boston University School of Medicine. During these years, Jack conducted widely-cited studies on diphtheria toxin, its phage, the diphtheria toxin repressor, and the regulation of cholera toxin, and his trainees included David Relman, John Mekalanos, Rino Rappuoli, Fadi Lakkis, Deborah Zucker, Jessica Boyd, John Love, Robert Harrison, Bill Bishai, and many others. He won global acclaim for his pioneering work on diphtheria toxin-based fusion proteins as anticancer drugs. Under this patented concept, recombinant bacteria are reprogrammed to express the killing and translocation domains of diphtheria toxin, but the toxin’s native receptor binding domain is replaced by a specific protein ligand that redirects the killing activity to tumor cells expressing the receptor for that ligand. This work led to the FDA approval of a diphtheria toxin fragment-interleukin-2 fusion protein called denileukin diftitox or Ontak® in 1999, as a first-in-class agent used extensively in the treatment of forms of T cell lymphoma.

Under Jack’s leadership BU was awarded $148 million in NIH grants in 2003 for the construction of one of two national high- and maximum-containment laboratory facilities for pathogen research known as the National Emerging Infectious Diseases Laboratories (NEIDL). Active research began at the NEIDL in 2012, and the facility became widely recognized for critical research on Ebola, tuberculosis, and SARS-CoV-2.  Jack’s sustained leadership over these years was instrumental in seeing the facility reach completion and in reassuring community activists. In 2014, Jack joined Johns Hopkins as a visiting and later full professor to collaborate with Bill Bishai and Drew Pardoll where his ongoing work has led to safer and easier-to-produce versions of denileukin diftitox and other fusion protein toxins. In addition to his enviable and extraordinarily successful scientific career, Jack is a lifelong avid sailor, master carpenter, accomplished cook, world traveler, home builder, and devoted father and grandfather.